Kathleen Plunkett-Black grew up in Vermont, gardening with her father. One year, he decided to let Kathleen and her two siblings each have their own small plots planted with anything they wanted. “I picked celery, my brother picked peanuts, and my sister picked brussels sprouts,1” she remembers, laughing.

In 1972, after a couple of years of attending university in St. Paul, Kathleen and her husband Bryce, decided to leave for a calmer and more self-sufficient way of life. They ultimately ended up buying a plot of land in western Wisconsin. “My full-time job was growing and making whatever we needed instead of going to earn money to buy it,” she remembers. There, she raised and homeschooled three boys. One year, some of their neighbors who had been “back-to-the-land-ers” became “back-to-the-city-ers,” and left behind their lush garden. Kathleen remembers walking by her neighbors’ plot and seeing dried bean pods. She realized that she could plant the seeds in her own garden.

A few years later, Kathleen read about Seed Savers Exchange in an Organic Gardening magazine article by Nancy Bubel in the early 1980s. Shortly thereafter, she attended her first Seed Savers Exchange summer campout with two young kids in tow. She remembers attending a demonstration by Glenn Drowns on how to hand-pollinate squash that left her inspired. She recalls thinking, “Ok, this sounded really complicated, but now I can see it’s possible. [I] probably started saving my own seeds from some of the squash (the summer and winter squash) right away after that.”

Now a veteran gardener, Kathleen advises newcomers to start small and try to experiment with a new variety each year. One of the varieties that she acquired early on is the Early Russian Black Spine cucumber. This historic variety has been grown in the United States since at least the mid 19th century, but her dedicated stewardship of it is paramount. Other cucumbers are more successful in her garden, but Kathleen realized a few years ago that she was the only person offering it in the Exchange. “I’m not the one to give you an inspiring story about how wonderful it is,” she says humbly, “I was trying to keep this one going; just to keep the seeds around.2”

“I really like having the whole cycle happening in my garden.” 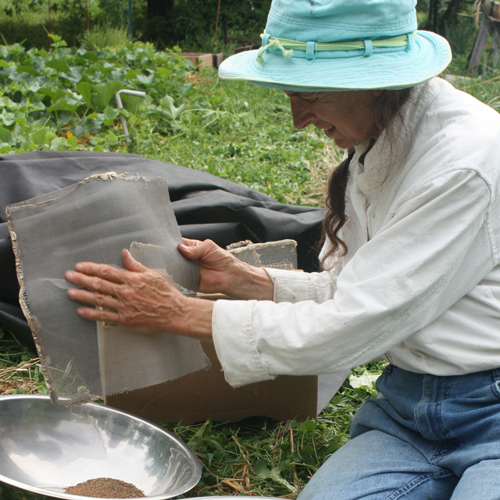 Kathleen’s years of experience have built her confidence and skill in saving seeds from many different vegetable crops. Today she is comfortable growing everything from squash, beans, and peppers to ground cherries, barley, and cowpeas. Over the span of her membership, Kathleen has listed over 150 varieties in the Exchange and has donated 10 to the Heritage Farm seed bank collection, inspiring hundreds of seed savers along the way. Kathleen is an extremely loyal steward of many of the varieties she lists in the Exchange. She started listing Arikara Yellow beans, Kuroda Chantenay carrots, and Foster flax over 25 years ago and still lists them to this day.

Almost 35 years after she first heard of Seed Savers Exchange, Kathleen still actively seeks to inspire new gardeners, homesteaders, and seed savers. Each year she teaches classes in her garden, the Menominee Food Co-op and Pepin Community Education Classes. Often she focuses on topics like seed saving, gardening, and how to feed yourself year-round from your garden. She also runs workshops at the annual Midwest Renewable Energy Fair. Kathleen and her husband Bryce are both vegetarians and they cultivate almost everything that they eat. “A lot of people think for some reason that we grow everything that we eat,” she says, “We don’t buy any vegetables or fruit… but we buy grains and beans and oil and nuts and seeds.”