John Swenson’s successful career in law translates seamlessly into every aspect of his life. In the late 80’s John turned his relentless pursuit of truth and accuracy, his wide ranging intellect, and his passion for alliums (the genus that includes garlic, onions, and leeks) towards a multi-year project uncovering the truth behind the etymology of the term Chicago.

After realizing that the common story that Chicago was named after a common prairie onion may be false, he spent countless hours methodically researching regional history (teaching himself to read 11 Native American languages along the way) in hopes of finding historical accounts that might aid his understanding of the etymological development of the term. He finally found the diary of Henri Joutel, a French soldier who traveled through the area in 1687. Locals explained to him that the area was named after chicagoua, the Miami name for Allium tricoccum, a wild garlic that grew along the river banks. Henri was an experienced gardener and naturalist who explained in his diary under no uncertain terms that Allium tricoccum was chicagoua. In 1991, John wrote "Chicagoua/Chicago: The Origin, Meaning, and Etymology of a Place Name” for Illinois Historic Journal, ultimately sharing the knowledge that he spent so many hours acquiring.

John Swenson graduated Magna Cum Laude from Dartmouth College in 1950 with majors in Philosophy and Sociology before attending Northwestern University School of Law. In 1975, while practicing as a lawyer, John became interested in alliums while flipping through a seed catalog. From there, he ordered rocambole garlic bulbs out of sheer curiosity, and has never looked back. Later that same year, he first read about Seed Savers Exchange (then True Seed Exchange) in Organic Gardening magazine. In 1984, he finally officially became a listed member, and a lifetime member in 1985. Over 33 years, John has listed 133 varieties in the Yearbook, and donated 150 varieties to Seed Savers Exchange’s seed bank collection. He has acted as an advisor to Seed Savers Exchange for several years.

“My attitude is: what good is knowledge if you can't share it?” 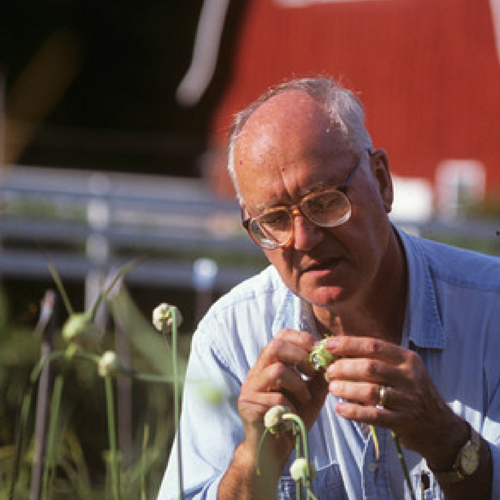 In 1989, John joined a USDA team of biologists on a collections mission through Russia and Central Asia. There, the team searched remote hillsides and bustling marketplaces alike, for every garlic, onion, shallot, and carrot possible. Even though the team entered the USSR fully accredited, foreign agencies often treated them with suspicion. At 6'2" John, remembers being assigned the smallest seat on a flight from Moscow to Ashgabat, recalling that the only available flights for Americans were undercover of the night. “It was like a military drill,” he recalls, laughing. “They didn’t want us American spies to fly out during the daytime because we could see.” Ultimately, the team returned with 120 varieties of garlic alone. Generally, USDA materials are kept in their collection, but John procured samples from as many of the USSR accessions as possible, and grew them all in his backyard! He later shared his entire collection with Seed Savers Exchange, which was the foundation of the organization’s garlic collection. He also listed many of his garlic varieties in the Exchange, and later sold much of his collection to Filaree Farms in Washington. Through John's exceptional efforts to share, some USSR garlic varieties became widely popular in the seed trade and many others became known and loved by garlic aficionados. His actions completely transformed the diversity of garlic varieties available in the United States and helped spark a Garlic Revolution, where the garlic varieties available in the US seed trade went from 18 in 1987 to 274 by 2004.

Even in retirement, John continues to help people track down varieties and stays active in his garden. He’s currently a volunteer with the Chicago Botanic Garden. “I have an on-going project of selecting and donating unusual seeds. A lot of my work has been with peppers, so I found dozens of peppers,” he explained. “They’re looking for something that has kind of an educational value.”