John Coykendall was born and raised in Knoxville, Tennessee by his mother and father—a school teacher and a banker, respectively. John’s grandfather owned a farm and was a congressman by profession. In 1954, when John was 11, his father taught him to plant potatoes and corn. It was then that John found his love of gardening. “I still get the same thrill out of digging new potatoes that I did the first year!1” remembers John.

Years later, a 16-year-old John broke into the abandoned Ebenezer Railway Station in Knoxville. There he found a long-forgotten copy of the 1913 William Henry Maule seed catalog. Inside, the Tennessee Sweet Potato pumpkin, which had long since dropped out of the seed trade, caught his eye. For the next 31 years, John searched for the pumpkin with no luck. Then in 1990, a friend sent him an article about Seed Savers Exchange and he immediately became a member. “I looked through that catalog and I say low and behold, there was four listings for it!... But they’re good! They make the best pies in the world. It takes an axe to cut one open, but they’re good.”

John’s primary focus has been on Appalachian varieties, but his interest in heritage seeds extends beyond his home region. Each year John spends a month in Washington Parish, Louisiana attending the Washington Parish Free Fair and searching for rare or almost-forgotten heirloom seeds. The fair started out at a horticultural event, but quickly evolved into a much larger undertaking. “They have a pioneer settlement on the [fair] grounds and there are historic buildings from all over the parish. Houses, post office, grist mill, syrup mill, church, school house, you name it. Everything's there on that one settlement!” says John. Every year, he cooks on a historic wood-burning kitchen stove, demonstrating traditional methods of Southern cooking to attendees.

Once the fair is over, John shifts his focus to the invaluable heirloom varieties of the area. However, sometimes he’s too late. “I’ve had so many stories that have turned out bad,” he said in a recent interview with Country Roads magazine.2“I get there just a week after they clean out the freezer [where rare seeds were stored], throw everything out, and sell the freezer for ten dollars on the sidewalk. But I’m trying to get as many of these seeds as possible. I always encourage people that have these seeds to come forward and get them into my hands. I’ll make sure that they’re taken good care of for future generations.”

“I still get the same thrill out of digging new potatoes that I did the first year.” 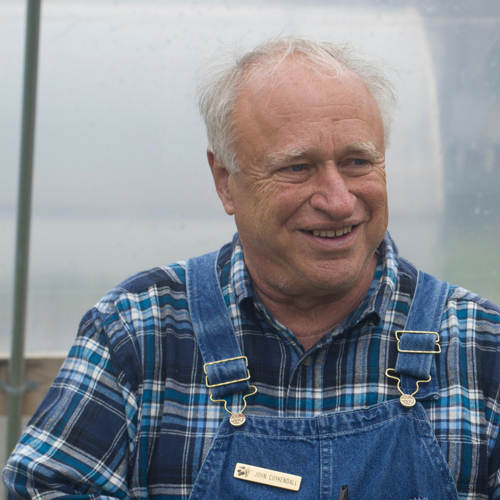 After his annual visit to Louisiana is finished, John returns home to Tennessee and preserves the newly acquired varieties and their stories with a method he refers to as “memory banking”. He fills countless moleskine notebooks with details of each story and beautifully rendered sketches of the seeds and the people who grew them, with hopes of preserving their heritage. John distributes many of these seeds and stories via the Exchange, sometimes offering upwards of 100 varieties each year. He has also given dozens of varieties to the Seed Savers Exchange seed bank for safekeeping.

Even though John jokes around about being an “old timer” he certainly hasn’t slowed down. He works as the Master Gardener at Blackberry Farm (a farm-to-table luxury resort) where he spends hours inspiring visitors with his endless bank of heirloom seed stories and booming voice. A love of heirloom seeds at Blackberry Farm may also be credited with how he met his wife, Ashley Valentine. She recalls, “He walks by me and I have my name tag... And he was like, “You can't have the last name of Valentine without having some Valentine beans!”... And then a couple weeks later I went to go see my dad in North Carolina and came back and one of my managers was like, “John left you something in the office.” Literally there was a bag of Red Valentine beans and Black Valentine beans.” John and Ashley married in May of 2017 and plan to grow out those very beans together.

Christina Melton, the Director of Special Projects with Louisiana Public Broadcasting, produced a documentary about John Coykendall titled Deeply Rooted which honors John’s seed saving pursuits in Washington Parish, Louisiana. It was nominated for two 2017 Suncoast Emmy Awards. John also is writing a book under the same title that is slated for release in 2018.