Jim Tjepkema, like many seed savers, gardened as a child with his parents. “My dad always had a garden as I was growing up. I helped some with planting it,” he remembers, “You know, my mother liked to do canning too, so we always had canned vegetables and some frozen as well, so that started me out in gardening.1” After graduating from high school, Jim attended Michigan State University, studying Entomology in the School of Agriculture. He continued his education at MSU, researching nematodes and their effect on blueberry crops for his Master’s thesis. Jim furthered his research on nematodes while obtaining his doctorate at Purdue University in West Lafayette, Indiana.

After graduating, Jim worked for a small crop consulting business for several years before opening Prairie Cro Consulting. He later acted as the Coordinator for the Rodale Midwest Farmers Network for five years. In 2010, the Sustainable Farming Association of Minnesota’s 19th Annual Conference honored Jim with the SFA Distinguished Service Award. “Jim merited this long-deserved honor due his extended commitment and strong representation of the South Central Chapter and the SFA state organization, as well as for his persistent fundraising efforts.2”

Jim began saving seeds in 1983 when he joined Seed Savers Exchange. One of his most well-known varieties, Jake’s tomato, is a Tjepkema family heirloom. Uncle Jacob “Jake” Tjepkema, was a cheese maker by trade, and an avid gardener and seed-saver. When Jim requested a bean variety that didn’t sprout, Jake sent a tomato that he was fond of in its place. It was a variety that Jake described as a heirloom from Germany which he’d grown for 25-30 years, but had never named. When Jim began listing it in the Exchange in 1989, it only seemed appropriate to call it “Jake’s.” “My uncle was very proud of having his seeds listed,” remembers Jim. “I gave him a copy of that.”

In 2017, Jim listed listed 81 varieties in the Exchange from a wide assortment of crops such as bean, amaranth, mustard, soybean, onion, spinach, and many more. You might assume that his extensive background in agriculture and large-scale seed-saving requires acre-upon-acre of farmland. In fact, Jim and his wife Kathryn, live in the heart of Minneapolis where Jim makes the absolute most efficiency of their small, backyard garden with lawn space to spare.

“Gardening is really, pretty much my favorite thing.” 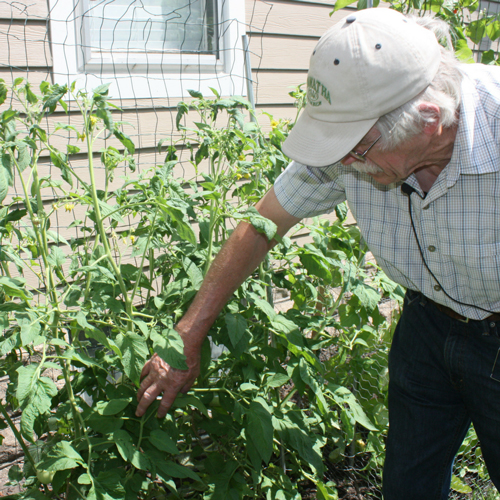 The Tjepkema’s garden is a precise and orderly maze of vegetable beds bordered by neatly edged turf. Jim plants both heirloom and hybrid varieties, adequately spacing those which may cross-pollinate one another. He provides plenty of flowers and herbs to attract pollinating insects, therefore Jim hand-builds isolation cages when he wants to be absolutely certain of varietal purity. A vertical trellis acts as a privacy screen along the side yard and provides support for a lush grape vine from a variety developed by the late Elmer Swenson, renowned amateur grape breeder from Wisconsin.

Even with this compact, garden footprint, his garden often produces a surplus of seeds. That’s why Jim participates in local seed swaps whenever possible. Jim explains that when folks see his assortment of seeds that, “Not everybody understands what they are, but they do have the idea that there’s going to be some seeds available to them there that they might be interested in. So, then I talk to them about saving seeds, and what my seeds are. You know, there are other people there that are offering seeds and we visit back and forth and a lot of information gets exchanged apart from just getting out some seeds.”