Even though George McLaughlin’s academic and professional background is in theology rather than biology or agriculture, George has been playing in the dirt for as long as he can remember. “[My parents] made me a sandbox and I remember my mom bringing me out watermelon while I was playing with my trucks, and I dropped a seed,” he recalls, “It came up in the sandbox and then my dad spotted it and was like, “That’s a watermelon, you can grow that!” And so I actually did. I stopped digging and we produced (by frost in New Jersey) a watermelon that was not quite totally ripe, but it was the best watermelon I had ever had cuz’ my mom went out and picked it and made a big to-do about it.1”

While a student at Grace College and Theological Seminary in Winona Lake, Indiana, George bonded over gardening with professor Dr. Don Fowler. Dr. Fowler explained that he grew a bean he had acquired from a family in California; who had been growing it ever since their ancestors carried it over the Oregon Trail. George was thrilled about the variety’s heritage and Dr. Fowler surprised him with a fistful of beans. George named them the Fowler bean in honor of his friend and mentor and began listing the variety in the Exchange. “They are a superior bean, they are very popular in the Seed Savers Exchange, they took off from the start!” says George. He and his wife, Jerreth, started listing in the Seed Savers Exchange Yearbook in 1985 and continued to do so for the next 27 years. Together they have grown, saved, and shared over 130 different varieties with gardeners in the Seed Savers Exchange community and have contributed over 60 varieties to our seed bank collection.

In addition to the Fowler bean, the McLaughlins have offered other family favorites in the Exchange, like the Barksdale Wax bean from Jerreth’s grandparents. This bean had been in Grandma and Grandpa Swalley’s garden for at least 20 years; they got it from their old neighbor, Claude Barksdale whose Aunt Lavera Halsclaw grew the bean for 40 or 50 years. “[It was] one of the garden varieties which taught me the most about seed saving,2” George explains. He remembers that he planted the beans late that first year, and doubted their fortitude until August when it started to cool off. “[The beans] exploded into production. In short order I stopped trying to glean pods from the other varieties, which were sagging. I could pick more than we could use from that 10' row of Barksdale Beans!”

After graduating from Seminary, George and Jerreth spent the next 14 years in Mexico as missionaries in both Tlatlauquitepec, Puebla and at the Instituto Bíblico El Camino de Vida (The Path of Life Bible Institute) in Ixmiquilpan, Hidalgo. Each place had its own climate and soil, but they made sure to garden in both places. In a letter to a fellow seed saver at the time, George explained how much trouble they had maintaining some of their heirloom varieties. Salem Split Leaf Sweet Potatoes barely produced, but even then he “just keep it going for the sake of family heritage.3” However during this time, George and Jerreth succeeded in collecting recipes, memories, and new seeds as they went along. “There’s a squash drink that we learned about when we lived in Mexico called atole… [it] is a hot drink normally and it’s sweet. It’s traditionally consumed, where we were in Mexico, around Christmas time,” George says,“ When we came back to the states I decided I needed to figure out how to make it ‘cuz I had neglected to get the recipe. I figured it out and then I added an American twist and use pumpkin pie spices in it...It’s wonderful on a cold winter night!” While While at the Institute, George taught Theology, Personal Computing, and Agronomy. “We did rabbits, chickens, some turkeys, a feeder hog as needed, gardens to supply food for the students and faculty on campus, and, for a while, bees.”

“Anything you can grow yourself: I think it adds to your understanding and appreciation of what it takes to live and live well.” 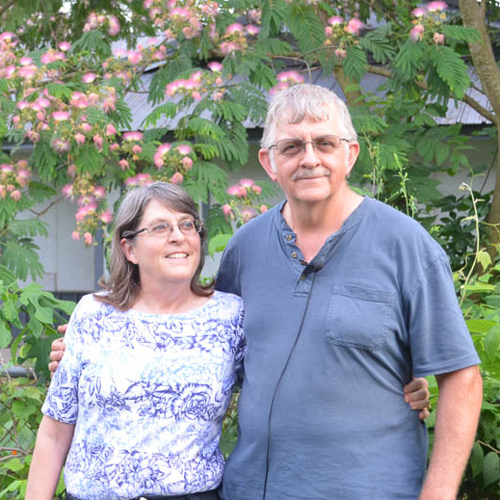 Available on the Exchange:

Eventually George and Jerreth settled in Oklahoma, where they homestead on their farm which produces small breed livestock, fruit trees, and a vast vegetable garden. In addition, they both work full-time at Northeastern State University, but still find time to produce content for their own instructional website, homesteadingedu.com. George and Jerreth were inspired to create the website after several years of hosting prospective homesteaders who worked at the McLaughlins’ farm in trade for homesteading lessons. “That was a blast, but you can only do that with like one group in a year,” says George, “The last couple we had here came up with the idea of starting a website- an educational website where we could actually teach people these very same things but in larger numbers of people.” Their classes aim to bring students from the level of an absolute beginner, to proficiency in that topic. “We have I think 6 or 7 courses up and we have materials to do dozens more courses!…We plan on dealing with small animal husbandry, lots and lots of gardening, seed saving, worm culture- vermiculture, and a lot of cooking because cooking is foundational for good living.”

In addition to their website, the dynamic couple also facilitates the Green Country Seed Savers network; which aims to connect gardeners in their area with varieties best suited to the climate extremes of the region. The group holds monthly meetings in local restaurants while the Green Country Seed Savers web forum allows for members to put forth questions and answers, recipes, and posts about general homesteading and community.