David Cavagnaro always wanted to be a naturalist. Growing up in the San Francisco suburbs, he often found his way to the nearby hills where he explored and developed a love for plants. He started his first garden when he was eight years old and by the time he was in high school, had cultivated nearly his entire neighborhood with help from a handful of friends. Years later, while attending UC Davis, David was introduced to Dr. Charles Rick, the world’s leading authority on tomato genetics. Dr. Rick invited David to the Galapagos where Rick was conducting scientific fieldwork, and later gifted him seeds from a wild tomato plant; igniting David’s passion for ancestral varieties. For the next seven years, David travelled globally, conducting scientific fieldwork and honing his skills as a cultural photographer. As of 2017, he has been published in 45 different books, 25 calendar publishers, and 75 magazines including Audubon, National Geographic, and Life.1

In the mid-1970s, David and his then-wife Maggie purchased a 180-acre plot in Sonoma County, California which they dubbed “Pippindale,” after their young son Pippin. There they learned to lead a sustainable lifestyle and photographed every stage for a book titled Back to Basics: How To Learn And Enjoy Traditional American Skills with Readers Digest. They also held gourmet dinners, classes, workshops, and hosted informal internships for people who wanted to start homesteading lifestyles of their own. In one class, David instructed the students dig all the holes and plant the entire Pippindale orchard, “We called it our class in graft!2” David remembered, laughing.

In 1985, Seed Savers Exchange cofounders, Kent Whealy and Diane Ott Whealy, decided to plant their first large-scale garden since moving to Decorah, Iowa from Missouri the year before. David recalls,“National Gardening magazine asked me to do an article on that garden. So, they flew me to Decorah for the summer campout convention—first one in Decorah, down by the Upper Iowa River by that garden. Glenn Drowns, who now has Sand Hill Preservation Center, was in charge of that garden that summer. 1,500 varieties in a five-acre garden... I went crazy. I was like a kid in a candy store!3” Right away David began to participate in the Exchange by listing varieties such as a Wild Peruvian tomato given to him by Dr. Rick and the now popular, Listada de Gandia eggplant, which David purchased from a Spanish seed company.

“I like to tell people that I got involved in gardening through the stomach.”

The next year, David offered his services to the Whealys as the summer gardener, for free of course. What was supposed to be a summer-long project ended up becoming an eight-year stint as Seed Savers Exchange’s first farm manager. He’s been advising Seed Savers Exchange in some capacity ever since and inspiring awe in genetic diversity through his sumptuous photographs of heirloom vegetables. David has grown and experimented with many more varieties than the nearly 100 which he has officially listed in the Exchange. 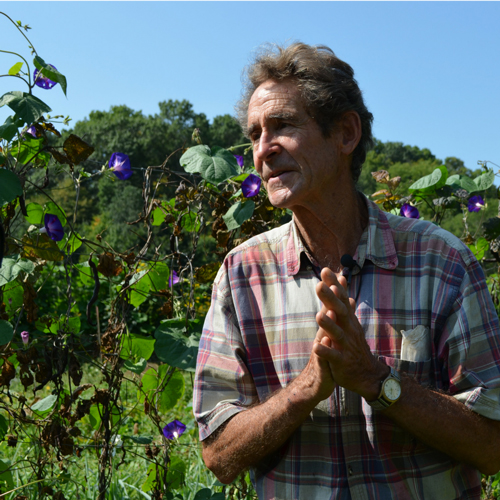 The idea for his current dream, The Pepperfield Project, came when David and SSE colleagues, Diane Ott Whealy, Rosalind Creasy, and Deborah Madison, realized that Seed Savers Exchange had never really placed an emphasis on food. “Why are we growing all these heirlooms if we’re not talking about food?” says David. Realizing there was no room to accomodate an educational food space at Heritage Farm, David (with funding from Amy Goldman) created one in his own home and backyard. “That was part of the inspiration for founding The Pepperfield Project here, was to create a place based on a lifestyle—a Seed Savers founded lifestyle where they are growing all of these beautiful heirlooms. Where people can come and learn the second half of seed saving, which is how to grow the material and cook with the vegetables and appreciate all of the wonderful ethnic heritages that went into the development of these varieties around the world.” David, along with Chef Mattias Kriemelmeyer, teaches workshops and hosts themed gourmet dinners (much like the ones at Pippindale) throughout the year. In addition to the classes and workshops at the farm itself, The Pepperfield Project also runs the Hospital Garden at the Winneshiek Medical Center, two edible landscapes at Luther College, 24 public school gardens in northeast Iowa, and assists in the design and planting of the Spectrum Network Disability Garden in Decorah.4