Even though Bill Minkey is a tomato seed-saving connoisseur, he didn’t start out that way. In fact, he remembers that gardening as a child felt like a chore. “My mother gardened for canning and stuff, and we’d help with that. Especially when we picked potato bugs, and potatoes... But [I] didn’t like gardening much back then ‘til [I] got into Seeds Savers,” says Bill, remembering how amazed he was seeing the all the varieties of tomatoes. “That’s what drew you in, the different colors!1”

In 1991 Bill was working in a factory when he saw an ad in the local newspaper for the Seed Savers Exchange. Soon after, a coworker also mentioned the organization and the rest is history. “I joined right at that point!” he explained. That same year Thane Earle, another Wisconsin lister in the Exchange, gave Bill his first ten tomato plants—all of varying colors and varieties. Bill soon began exchanging seeds with Craig LeHoullier, who literally wrote the book on tomatoes.

Craig both introduced Bill to varietal favorites like the Brandywine OTV tomato and to his own Dwarf Tomato Project. Each year LeHoullier sends Bill new tomato seeds to plant. At the end of the season, the two split the seeds from the grow out and Bill lists some in the Exchange. Over 26 years, Bill Minkey has donated nearly 500 varieties of tomatoes, beans, lettuce, and peas to the Seed Savers Exchange seed bank collection, and in 2017, Bill listed 1,011 varieties in the Exchange. When asked why he still gardens after so many years, Bill didn’t hesitate. “It’s all about the taste. If a tomato doesn’t taste I don’t even want to talk about it.”

“It’s all about the taste. If a tomato doesn’t taste I don’t even want to talk about it.”

In the early 90’s, friend and neighbor Juanita Holfstrom, introduced Bill to one of his favorite varieties, Aunt Ruby’s German Green. Holfstrom explained that the Aunt Ruby’s German Green was named after her aunt, Ruby Fair Arnold. She recalled, “Now and then she would send my mom some seeds, dried in a paper napkin.” Juanita had limited success with the variety in her own garden, but handed on a sample onto Bill, hopeful he might have better luck. It was in his garden, in fact, where the tomato (then known as German Green) prospered. 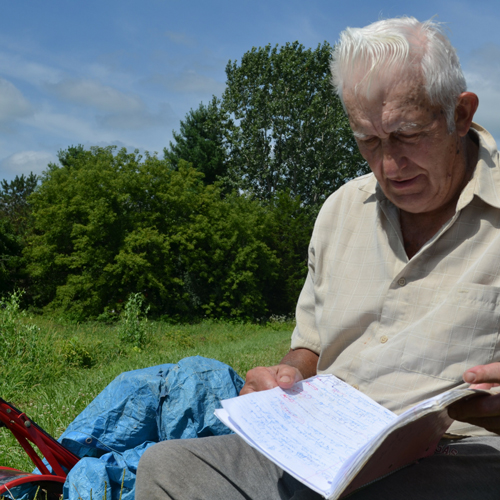 Inspired by the sweet, slightly spicy flavor, and with Juanita’s blessing, Bill officially changed the name to Aunt Ruby’s German Green. Due to Bill, the beefsteak is sold by over 56 seed companies far and wide, is listed by several gardeners in the Exchange, and was showcased in Carolyn Male’s 1999 book2100 Heirloom Tomatoes for the American Garden. Tomato aficionado Carolyn Male described it as “The only true large green beefsteak I have ever seen.”

Bill Minkey runs his garden like a tight ship. “That’s the only reason I don’t like people like you coming—is the weeds!” he laughs. When we visited him in 2017, Bill was in the middle of a precipitous growing season and explained that he believes the weeds help his tomatoes by keeping their roots stable in the rain and keeping them warm when it starts to frost. From season to season, Bill records detailed notes on each variety growing in his multiple garden plots in a filled-to-the-brim, spiral-bound notebook. He chronicles the names, characteristics, growing habits, and how each variety tastes.

In addition to his tomatoes, Bill grows potatoes, peppers, beans, and over 200 different gladiolus varieties. The gladiolus, much like the tomatoes, caught his eye initially with their variety in shape and color. When the weeds in the garden start “getting ahead of him,” his loved ones (including his sister and his girlfriend) offer help.